Rs. 1,850.00
Rs. 1,749.00
Assemble it and discover the principle of working of the Pendulum. Experiment: the model comes with QR-code to a Pocket Model’s Study Guide with a creation story and mechanism design...
Availability: Many In Stock

Assemble it and discover the principle of working of the Pendulum.

Learn how the PENDULUM works

The Pendulum is a stylised educational model, an interactive study guide to the mechanism, only for learning its essentials and principles of working. The pendulum is one of the basic and most reliable time measuring mechanisms. Its working principle is based on the model's constant amplitude oscillation under the force of gravity (weight) and potential energy (tension force) of the rubber band. The rubber band powers the mechanism of the model and compensates for the pendulum's oscillations' kinetic energy loss. The device is animated by means of gear unit with a windup wheel.

The model has an anchor escapement controlling the frequency of oscillations, a weight, a scape-wheel, gearing, rubber band, ratchet, and pawl reducing operation error. The model has several means to control the frequency of oscillations: the weight of the pendulum bob, the vertical position of the weight on the pendulum, and the tension of the rubber band.

Pendulums are mainly used in mechanical clocks as an element of a launch mechanism and the way to provide a steady rate. In the musical sphere, metronomes that have pendulums as their chief constructional element, help musicians practice playing to a regular tempo. Pendulums are also used in geological surveying, seismography, sports, and laboratory research in mechanics and physics. 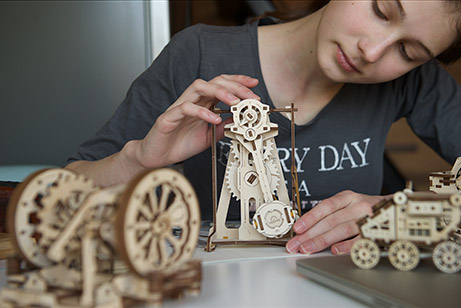 The thrill of speed, roar of engines, wheel to wheel battles and shiny frames flashing before the eyes of wildly excited audience of the early car races – it’s all...
Rs. 3,888.00
Add to wishlist
Add to compare
-5% Be a part of the once great era of steam with just a breath of air. The Pneumatic Engine is a small but fully functional example of a steam engine,...
Rs. 1,699.00
Add to wishlist
Add to compare For children from 5 years old … as well as grown-ups of any age.  The memories of childhood come from a craze of dreams, emerging from the imagination of everybody,...
Rs. 230.00
Add to wishlist
Add to compare For children from 5 years old … as well as grown-ups of any age.  The memories of childhood come from a craze of dreams, emerging from the imagination of everybody,...
Rs. 230.00
Add to wishlist
Add to compare
-5% The very essence of Steampunk, the 3D puzzle “Steampunk Clock” from Ugears is here to remind you of the true spirit of this unique style combining art, science, and amazing...
Rs. 849.00
Add to wishlist
Add to compare
-5% UGEARS presents a new unique item for your collection of wooden models – loaded with fun, aimed at positive emotions, the Wolf-01 handgun. This new arrival to UGEARS latest range...
Rs. 2,175.00
Add to wishlist
Add to compare
Just added to your wishlist: